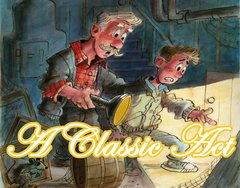 ​Lately Adventures in Odyssey is following an interesting trend. B-TV is back, we’re revisiting the Blackgaard saga with an all-new book series, and the fate of Tom Riley and his farm have finally been resolved in the two-parter Legacy on Album 62. AIO seems to be going back to its roots. And just as the show was marked by the prominence of non-Christian characters in the past (Connie and then Eugene), now Odyssey seems to have an abundance on non-Christians such as Renee Carter, Buck Oliver and Jules Kendall. And not only have Whit’s daughter Jana and grandson Monty made recent returns, but now Whit’s brother-in-law Wilson Knox may become a regular character and we’re poised to hear more about Whit’s often-forgotten sister Charlotte.

As AIO moves forward, more and more it appears to be drawing on its past as the fuel for future stories. I think that’s a wise move. The show may have countless story arcs, but they all come together to form a unified tapestry. And allowing AIO’s history to make an impact on the present makes Odyssey seem more like a real place. That’s why I’ve created this editorial to discuss some episode types from AIO’s past that shouldn’t be forgotten. In the show’s early albums you will find many ideas for storytelling that could be reintegrated into modern Adventures in Odyssey. I’ve listed nine of them.

1. Family Vacations
​
Something missing from modern AIO is the family road trip. These are stories that break from the routine and create opportunities for both the characters to bond with each other and the audience to bond with the characters. The Barclay family is introduced in the episode Family Vacation (Album 2) with their trip to Florida, but it’s important to note that we never hear them reach their destination. The story isn’t about the destination. Instead, it’s about the various mishaps that occur along the way. But that doesn’t mean destinations can’t make for great adventures. The Barclay family’s trip to Hawaii in Aloha, Oy! (Album 19) is an all-time fan favorite. It’s both fun and heartwarming. Family vacation episodes have to return. Can you imagine a Meltsner family road trip with Eugene, Katrina and Buck? (Or even a Meltsner reunion which brings back Leonard and Everett) That would be amazing.

AIO’s target audience are kids ages eight to twelve. And when most kid characters grow out of that age range they tend to leave the show. But AIO has older listeners too, and even twelve-year-olds have to start to deal with more mature things, so it makes sense that a popular character like Jimmy Barclay was allowed to stay on the show despite entering puberty in Coming of Age (Album 11). His sister Donna was also allowed to grow up, as we hear in Modesty is the Best Policy (Album 13) and Preacher’s Kid (Album 23). Obviously AIO should handle the issue of kids maturing delicately, but I don’t think it should move away from it altogether as it seems to be doing lately. We don’t need to see every kid character experience the responsibilities and pitfalls of the teenage years, but some episode should definitely touch on the topic of growing up.

John Avery Whittaker is an inventor, veteran, teacher, secret agent, and ice cream and discovery emporium owner. But it’s easy to forget that he’s also a writer. Whit is a storyteller whose talents have lately been underutilized. Connie reads one of his stories in The Tangled Web (Album 1) and discovers that Whit has a knack for avoiding cliché endings and instead goes the unpredictable route. One of Whit’s stories even gets turned into a movie in A Day in the Life (Album 11). And since everyone at the premiere liked it, it’s only a matter of time before Hollywood once again invades Odyssey looking to make money off a sequel. I find it hard to believe that Mr. Whittaker has suddenly given up writing fiction, and it’s only a matter of time before we get to enter into one of his stories again.

Most of AIO’s historical episodes deal with the distant past, such as Bible adventures. The show also specializes in early American history, and a few 20th century era stories. Anything post World War II is virtually unheard of. But in 1988 the episode The Price of Freedom aired (Album 6), just thirteen years after the Vietnam War ended in 1975. It deals with the treatment of Vietnam veterans, a very relevant topic for the time. Because it was made close after the war, it was able to speak to families who had recently experienced loss in the Vietnam War, while still having a timeless quality which can speak to people from other generations. If AIO was to do another historical episode from the recent past, the most obvious one is 9/11, which will be sixteen years ago this September. Since kids in Odyssey’s target audience were all born after 2001, a 9/11 episode would be a great teaching opportunity, while at the same time it would be able to draw on the living memory of the AIO cast and crew.

Someone to Watch Over Me (Album 10) is one of Adventures in Odyssey’s most unique episodes. It follows Jimmy Barclay on what seems at first to be an Imagination Station adventure, but then turns out to be an epic battle for his life with the Grim Reaper. Jimmy is protected again and again by Nagle, who we later find out is his guardian angel. I love this episode because it comes out of nowhere, offers clues along the way but no full explanation for the longest time, and does a brilliant job tying everything together at the end. It’s an exceptionally creative standalone story which showcases the talents of the AIO team and pushes the boundaries of the show. Another episode that might be called nonconventional is the AIO Club episode Follow Me (Season 2), in which Whit speculates what Jesus’ disciples were like as children rather than following a traditional Bible story. Nonconventional episodes stand out and can become fan favorites. There’s no formula to creating them, because by their very nature they are not going to resemble each other. There’s also the risk that the episode idea won’t work at all. But I think the AIO Club could be the perfect place to experiment with these types of stories. And if modern AIO took that risk every once in a while and produced a creative nonconventional episode, that would fine by me.

Something that was more common in early AIO was ordinary, everyday problems that kids experience, like friendlessness and bullying in A Change of Hart (Album 1), the dentist in Dental Dilemma (The Lost Episodes) and common fears in Nothing to Fear (Album 1). Stories focusing on kid problems are the perfect scenarios for Whit to offer over-the-counter advice. Of course, it’s not too exciting when Mr. Whittaker is always confined to serving ice cream at Whit’s End, and it would get a little maddening if that was the formula for every show. But it doesn’t have to be that way, even if we’re dealing with kid problems. There is any number of ways that AIO can integrate good advice into their shows without being formulaic, and that advice will be especially relevant to the target audience if the routine issues they deal with are addressed.

Just like Whit’s writing, Camp What-a-Nut is another underutilized resource on the show. Having adventures at camp is like a rite of passage, and yet we’ve seen very little of Camp What-a-Nut since it was introduced in Album 2. In Wooton Knows Best (Album 54) it was announced that Wooton was going to be a camp councillor, but the episode ended up being a pre-camp story about Olivia and Matthew Parker competing to be Wooton’s camp assistant. The story was okay, but what a missed opportunity to have an episode starring Wooton as a camp councillor! That would have been unforgettable. Maybe we’ll get a fun summer episode at Camp What-a-Nut in the future, and I hope Wooton is close by.

8. Sad Endings
​
Kids go through some hard stuff in early Adventures in Odyssey. Monty experiences some intense fights with his mother and grandfather in A Member of the Family (Album 1) and Donna loses her friend to cancer in Karen (Album 3). But both these shows have uplifting endings. No so with the episode Home Is Where the Hurt Is (Album 11). It ends with Curt rejecting the help of Lucy and Whit and then crying once he’s alone. Executive Producer Chuck Bolte gives a message at the end in which he says there are no easy answers to Curt’s situation. It’s an important story that needs to be heard. It’s interesting to note that modern AIO’s sadder stories, such as To Mend or Repair (Album 55) and Life Expectancy (Album 57) feature adult characters experiencing tragedy, not kid characters. AIO shouldn’t be afraid of having kids experience the occasional sad ending on the show because it may help them to get through the hard things they experience in real life.

Story arcs like the Novacom and Blackgaard sagas are great if you have the time on your hands for a long audio drama session. But sometimes a shorter mystery best suits the occasion. The Case of the Secret Room (Album 2) is a great alternative. It’s not as long as the epic twelve-part Green Ring Conspiracy and not as mundane as the typical Emily Jones mystery. The Case of the Secret Room is a relatively simple story but it maintains an unsettling atmosphere throughout. And it does so while exploring the history of Whit’s End, a building which has many secrets indeed. The discovery of the skeleton at the beginning immediately plunges the audience into the creepy feel of the show, a feeling that never lifts until the credits roll. The atmosphere established at the beginning allows even the most commonplace events to seem scary. Modern AIO could learn something from The Case of the Secret Room and its skilful use of tension and subtlety.
​
I would never want Adventures in Odyssey to try to remake episodes like Someone to Watch Over Me, The Case of the Secret Room, and Family Vacation. The originals I think will stand the test of time. But that doesn’t mean modern AIO should ignore its roots. There are some very useful episode types that were established at the beginning of the show that could be adapted for today. Who wouldn’t want to hear another adventure at Camp What-a-Nut or a family road trip across the country? There is so much potential there. Looking back at the great shows AIO has produced in the past, it’s exciting to think about what new adventures are in store for our favorite Odyssey characters.
Next: Editorial 28
Back: Editorial 26
List of Editorials
This site is in no way affiliated with Focus on the Family. "Adventures in Odyssey" is a registered trademark of Focus on the Family.