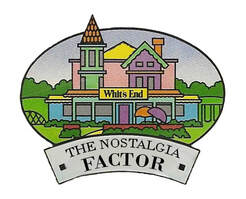 ​Do you remember the first time you heard Adventures in Odyssey? Perhaps you were only a child, still learning how to work the radio. Maybe you hadn’t learned to tie your shoe laces yet but you quickly became an expert at turning over the cassette tape so you could hear the next episode in the Barclay’s Hawaiian vacation. Nostalgia is defined as a longing for the past. Although it’s mostly a positive feeling, it can also be bittersweet as we recognize that those childhood days are over. The things we grow up with are special. They stick with us, those memories from a time to which we can never return. Or can we? Is it possible to relive those experiences from bygone years? These days we’re being inundated with Star Wars sequels and live-action remakes of animated Disney fairy tales—all in an attempt to recreate that sense of wonder we felt as kids. Could this phenomenon be surfacing in Adventures in Odyssey as well?

It’s a great time to be an Adventures in Odyssey fan. Co-creator Phil Lollar is back writing and directing, the recent Get in the Show contests have allowed fans to actually appear on the show, you can access the entire Odyssey library via the AIO Club, there’s talk of maybe increasing the number of new episodes released per year, and it seems like new books are coming out all the time. The Imagination Station book series has been particularly successful. The cover of the latest release, Terror in the Tunnel, announces that over 900,000 copies in the series have been sold. That’s just shy of a million since the series premiered in fall 2011. Meanwhile, I’m personally most excited for two new book series: the Blackgaard Chronicles and Young Whit.

Each of these series is a blast from the past. The Blackgaard Chronicles dives headfirst into the Blackgaard years again, filling in gaps in the show we never knew existed. Meanwhile, Young Whit goes further back, plumbing Mr. Whittaker’s childhood in search of epic new adventures. My first reaction? Bring on the nostalgia. Give me a Novacom book series while you’re at it, please. And maybe a spin-off series starring Robert Mitchell, FBI agent extraordinaire, if it’s not too much trouble. I’m sure Budapest’s criminal underworld has a few stories to tell about him. By the way, what exactly were Eugene and Katrina doing on their world travels for all those years? And what about Margaret Faye’s untold backstory? And when are we going to find out about Boswell the cat’s ball of yarn story arc? That could fill in so many missing pieces.

Okay, maybe the Boswell one goes a bit too far. But where do you draw the line? As fans, we love Odyssey and we want more of it. If we had our way Richard Maxwell would have returned by now to fight crime with Rodney Rathbone as his sidekick. We get attached to the characters we know so well. And sometimes it’s hard to imagine new characters and storylines that take us in different directions. Remember, in the early days some of us fans wanted Eugene and Connie to get married to each other. We did not envision the new character of Katrina appearing and sweeping Eugene off his feet. Likewise, I don’t recall anyone clamoring for a hilarious schemer with a good heart like Jay Smouse. But since Jay appeared in Album 51, suddenly it’s hard to imagine the show without him. It’s the job of the writers to think outside of the box, to give us episodes and characters we didn’t know we needed and yet fit Adventures in Odyssey so perfectly.

On the other hand, there’s nothing wrong with a little nostalgia every once in a while. Throwback moments are great. I love it when the band the Pool Boys return in Find a Penny (Album 63) or when Davey Holcomb comes back to visit Whit’s End in Stars in Our Eyes (Album 43). This year’s upcoming episode B-TV: Idolatry (AIOC Season 6) will feature a sequel to Gifts for Madge and Guy (Album 1). And filling in gaps isn’t a bad idea either. One of my favorite episodes, The Triangle (Album 36), was inspired by a line delivered in passing by Jack Allen in For Whom the Wedding Bells Toll (Album 29). The Blackgaard Chronicles book series is definitely nostalgia-driven. It’s an opportunity for fans of all ages to relive AIO’s greatest hits from a new perspective. We get to learn more about the schemes of Philip Glossman and Dr. Blackgaard and re-experience some of the show’s most epic moments. It’s a great tribute to an audio drama that recently celebrated its thirtieth anniversary.

Nostalgia can be fun, but you can’t live on it. The Blackgaard books are going to come to an end eventually, and rightly so. Adventures in Odyssey’s most famous villain can’t keep coming back again and again. At some point he has to stay dead. Meanwhile, AIO’s main character is more alive than ever before. Our own John Avery Whittaker is the star of the new Young Whit book series, which gives an account of his early life as a precocious ten-year-old. Right now there are at least five books planned, which will cover just one year of Whit’s life. Writers Phil Lollar and Dave Arnold are understandably enthusiastic about this new venture and hope it can continue beyond just five books. But is that sustainable? Isn’t this just another series fueled by nostalgia?

Perhaps in part. Retreating into nostalgia is comforting. It’s a return to the familiar. The Blackgaard Chronicles promises to do just that, albeit with a few surprises along the way. We all know the stories of Whit as a young boy in episodes like Thank You, God (Album 3), Blackbeard’s Treasure (Album 22), and the Journal of John Avery Whittaker (AIOC Season 3). We roughly know the path Whit takes in life through his adolescent years. And we know for certain that he ends up as the grandfatherly operator of an ice cream shop and discovery emporium in the small town of Odyssey. The book series will be a prequel of sorts to the main series, and it will build upon a number of things we already know.

One of the complaints about prequels is that you already know the ending before the story begins. So what’s the point in telling the story? We already know the person Mr. Whittaker becomes. But when you think about, that’s the case for any superhero origin story you might watch in theaters today. Everything from Spider-man to Captain America, we know what’s going to happen by the end of the first movie. We know that our main character will have risen from a place of obscurity to take on the new responsibility of fighting the forces of evil and defending the good. What makes origin stories interesting is the journey—how our main character transforms before our very eyes. The Young Whit series is essentially an in-depth origin story for Whit.

And this is where I think the series has the potential to go beyond mere nostalgia. Rather than simply fulfilling our desire to return to a comfortable past, it can instead give us a ride we never expected. It can show us Mr. Whittaker as we’ve never seen him before. Not as a wise, grandfatherly figure who can draw a lesson out of any situation. Not as a seemingly perfect character whose main purpose is to guide others through the trials of life. Instead, the series can show us John Avery as someone just like us—an imperfect person full of faults and failings, struggling through life to find what God has called him to be. The writers have already mentioned that Whit is not a Christian in the first few books, and that there’s a big surprise coming down the pipe later on in the series. I'm expecting some wild rides from these books.

Now, there are potential pitfalls to avoid when writing any prequel. The key thing to remember is that you don’t want to take away from your original story. One temptation is create something bigger and more epic than we’ve ever seen before. That can easily end up overshadowing and undercutting the original story. The other temptation is to reveal too much information about the past to the point that any sense of mystery and intrigue about the original story is lost. Now, of course we’re going to be learning a lot more about the past in a prequel. That’s unavoidable. We’re going to know a lot more about John Avery Whittaker by the time the book series is over. But we don’t need to know absolutely everything. If we had every question answered, what would be the point of revisiting Whit’s past in future AIO episodes? The challenge will be balancing the need to reveal the need-to-know information while still maintaining a sense of the mysterious.
​
Somehow I think our Adventures in Odyssey writers are up to the task. I’m going to thoroughly enjoy the Blackgaard Chronicles books while they last. It’ll be fun to revisit some of my favorite episodes from a fresh perspective, from the redemptive journey of Richard Maxwell to the grisly fate of Dr. Regis Blackgaard. But with the Young Whit series I’m looking for something a little different. I’m hoping to follow young John Avery on a journey of ups and downs and plenty of unexpected circumstances as he slowly draws closer to becoming the person we all know and love. I’m not expecting his journey to be linear or simple. Real life is complicated. We are all on a path of transformation in our own lives. We make mistakes, we wander, and it’s only by the grace of God that we make it through. Our journey through heartache is nothing to be nostalgic about. But by looking back on such past experiences we can certainly draw strength from them, knowing that God was faithful then and that he will continue to be faithful now and forever.
Next: Editorial 33
Back: Editorial 31
List of Editorials
This site is in no way affiliated with Focus on the Family. "Adventures in Odyssey" is a registered trademark of Focus on the Family.