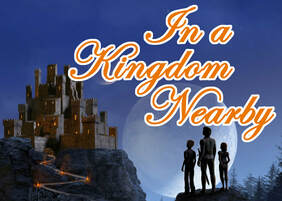 Traveling to other places has never been very hard for the kids of Odyssey. Mr. Whittaker’s Imagination Station offers plenty of opportunities to go back into Bible times or experience American history. And although I’m sure Whit does his best to make sure the simulation is historically accurate, no one would make the argument that the machine actually uses time travel. Everything is simply happening inside people’s heads. But is that always the case? Some of Odyssey’s youngsters claim to have stumbled upon another world called Marus, without the aid of a machine. They enter into a realm inhabited by kings and queens, prophets and warriors, and ruled by the Unseen One. These stories are chronicled in the Passages book series.
​
Sometimes I wonder if there’s room in the Adventures in Odyssey universe for the Passages series to exist. Starting with Darien’s Rise, the six books set in the alternative reality of Marus were released by author Paul McCusker from 1999 to 2000. At the time the AIO team decided to promote the series by producing two tie-in episodes called Passages: Fletcher’s Rebellion (Album 34). We learn that Tom Riley’s late son Timmy may have gone to Marus himself. When you think about it, the Passages series has some explosive implications, perhaps more so than the mind control technology of the Novacom Saga. We’re talking about the possibility of another world. A world like Narnia where kids enter at unexpected times. Science fiction is one thing. But this is fantasy territory, which for many is a lot harder to accept. Maybe that’s why we can never get definitive proof that Marus really exists. On page 599 of the 2012 Official Guide, Paul McCusker notes, “In our series, the mysterious notebooks leave a question about the reality of Marus. Maybe it is real, or maybe it’s just a place that some guy made up.” At the same time, the series strongly hints that Marus is a real place.
​
More recently, Darien’s Rise became the first and (so far) the only Passages novel to be adapted as an audio drama. Since that time actor Alan Young, the voice of Jack Allen, has died. The search for Marus was always an investigation between Whit and Jack. So does that mean that, as far as the audio series is concerned, Passages is over? Not necessarily. When I learned a few years ago that the new editions of the Passages books no longer included the prologues and epilogues, I thought it was a mistake. They removed every scene with Whit and Jack and present the individual stories without context. But now I see that this move might give the show writers more freedom when it comes to audio adaptations. We don’t really need Jack to be investigating Marus. Now that Jack has moved away, Whit could very well continue his investigation alongside someone else—his son Jason perhaps.

Passages needs a new spin to jumpstart the audio adaptations again. We’ve had tie-in episodes before, and they might just do the trick this time. In thinking about these ideas, I’ve come up with an outline sketching a possible way forward. It was pretty fun writing it and I hope you enjoy. So without further ado, here’s my idea for a six-episode album to set up the next Passages audio adaptation.
​
Album: Out of This World

From there we could dive right in to the adaptation of Arin’s Judgment and Whit and Jason could continue the hunt for more manuscripts. The main problem I think would be keeping Jason’s interest in the mystery and combatting his intense skepticism. My solution here was to have him encounter someone like James, a person so firm in his belief in Marus that he was willing to risk his life for it. After that I don’t think Jason would be able to put Marus out of his mind so easily.
​
So, this is just one possible way to bring back Adventures in Odyssey’s adaptations of the Passages novels. I hope you enjoyed reading it as much as I enjoyed outlining it. And I look forward to seeing the official, canonical version when the AIO writers eventually do transition back into the world of Marus. One thing I wouldn’t want the AIO team to do is to move forward with dramatizing the individual Passages stories without the prologues and epilogues. It's those bookends which connect the stories to the people of Odyssey we care so much about. And half the fun of Passages is the mystery of whether Marus is real or not. So let’s have Whit keep grappling with the possibility. Let’s have Jason grapple with it too. And let’s have Adventures in Odyssey listeners go back and forth debating the topic along the way as the rest of the Passages books finally get dramatized.
Next: Editorial 34
Back: Editorial 32
List of Editorials
This site is in no way affiliated with Focus on the Family. "Adventures in Odyssey" is a registered trademark of Focus on the Family.