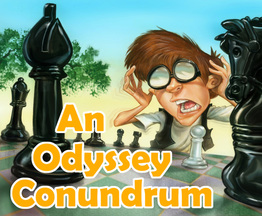 The Adventures in Odyssey writers have done a great job giving fans a behind-the-scenes look at the show, especially in recent years. Things like podcast interviews, the Official Guides, the bonus content available on album releases and on the Odyssey Adventure Club, and informative posts on social media have all been useful in engaging with the Odyssey community. We come with our questions, concerns and ideas and the AIO team answers with helpful responses. But sometimes one explanation isn’t enough and can bring up more questions than it answers. On page 285 of the 2012 Official Guide, it says, “As often happens with Adventures in Odyssey, every answer we attempt to give actually raises more questions.” This is true not just in terms of questions about what’s going to happen next with the characters on the show, but also when it comes to questions about the writers’ reasoning behind the making of the series.

This editorial looks at four areas where the Odyssey team has given some behind-the-scenes information about the show in the Official Guide. The information they give is definitely enlightening and can at first glance be taken as interesting tidbits or trivia, but upon further thought one finds that these statements still require more explanation. They simply raise more questions than they answer. Hopefully one day we’ll have good solutions for these various conundrums.

The first conundrum which requires explanation is an interesting connection between the Christmases of Album 1 and Album 45. On page 85 of the 2012 Official Guide, writer Paul McCusker says, “I originally wrote ‘The Day After Christmas’ around a nostalgic idea of Whit and his memories of Christmases past. But Chuck Bolte wisely insisted that kids wouldn't relate to an adult's memories.” So the show ended up going in a different direction. That apparently was the feeling in 1987 when the first episodes of Album 1: The Adventure Begins aired, but times must have drastically changed since then. Not only have we heard multiple stories from the past of Whit and other adults, but AIO has even produced an episode which sounds remarkably similar to Paul's original idea from Album 1. In the show Silent Night on Album 45, a snowstorm keeps Mr. Whittaker at home and he spends his time reminiscing about Christmases gone by. That’s basically the same as the first draft of The Day After Christmas, which was scrapped for seemingly good reasons. So maybe Silent Night isn’t as relatable as it might have been, but ironically I’ve always liked it a lot better than The Day After Christmas. It seems basing a whole episode on an adult’s memories isn’t such a bad idea after all.

2. The Trouble with Guns

In The Case of the Secret Room on Album 2 the villain Percival Fenwick was originally supposed to threaten Whit with a gun, but it was changed to a knockout dart. According to page 96 of the 2012 Official Guide, "Paul McCusker remembers how producer Steve Harris told him the gun part was too violent and had to be cut." If that’s the position the AIO team wants to take on guns, that’s fine. But they’re inconsistent on this front because guns do show up in many later episodes. Characters such as Hank Murray in Hold Up!, Maria Mendosa in The Cross of Cortes, Frank Phillips in Waylaid in the Windy City, Benjamin in The Search for Whit, Mustafa in A Name, Not a Number, and Monica Stone in Sheep's Clothing all pick up a gun to threaten our friends in Odyssey. In Accidental Dilemma on Album 50 we get a break from guns when the villain, who goes by the name the Whisperer, uses an electrified cattle prod instead. But by Album 53: The Green Ring Conspiracy it's back to the gun, which Dirk Begs uses to threaten Wally Haggler. Of course, there's also been quite a bit of violence on the show that doesn't involve guns, such as a bomb going off under Whit's End at the climax of Album 25: Darkness Before Dawn or Justine Baker being run off the road and killed during the Novacom saga on Album 38: Battles Lines. These days the occasional character waving around a gun to threaten someone, but never actually pulling the trigger, is far more tame in comparison.

Can Odyssey episode titles be changed? The answer is of course yes during the script-writing process. Different episode titles are thrown around all the time. There are even episode titles that are changed after the script has already been printed for a recording session, such as Life Expectancy on Album 57, which was titled “Ripples” originally. But that’s not really what this third conundrum is all about. The question here is whether episode titles can be changed after a show has been fully produced and released to the public.

Arguably there are many episode titles which should have been changed, but were not. The first draft of But, You Promised on Album 6 was all about making promises, but the show ended up having a different theme in the final draft. The final show isn’t about promises at all, but about lying to cover up poor decisions. But somehow the episode title was never changed and unfortunately has nothing to do with the episode. If any title should have been changed, it should have been that one. The show Aloha, Oy! on Album 19 was also the result of a mistake. It was supposed to be titled "Aloha, Oi!" (an allusion to the Yiddish exclamation "Oi") but it mistakenly came out Aloha, Oy! when it was released. It was never corrected. Album 21 featured Eugene and Bernard's road trip to California and each episode title included a number. The first was First-Hand Experience, the second was Second Thoughts, etc. When it came to the last two, they were titled The Fifth House on the Left, Parts 1-2. However, a month after they aired writer Paul McCusker came up with a better title for the sixth show: "Six on the Richter Scale." But by then it was apparently too late to change it, so it never was.

Seemingly those titles were set in stone and could never be altered. Other episode titles, however, have been changed after their original broadcasts. What Happened to the Silver Streak? on Album 9 was originally titled “Whatever Happened to the Silver Streak?” but was changed after its release. Treasure Hunt on Album 14 was originally titled "War Games" when it first aired, but was subsequently changed. Similarly, the episodes Passages, Parts 1-2 on Album 34 were retitled Passages: Fletcher's Rebellion, Parts 1-2 a whole ten years after they first aired in order to distinguish them from Passages: Darien's Rise. So can episode titles be changed? I guess it depends. But it would be helpful if the AIO team gave a more lengthy explanation. And maybe one of these days the show But, You Promised can finally be retitled to something that actually fits its content.

4. The Case of the Disappearing Straussbergs

With the release of Album 51: Take It From the Top many of the families on AIO left abruptly without a send-off and were replaced by new characters such as the Parkers and the Jones. But one family, namely the Straussbergs, almost got a proper goodbye. The original recording of the episode Life in the Third Person ended with the family deciding to move away from Odyssey to Chicago. According to page 494 of the 2012 Official Guide, the ending was changed to allow the Straussbergs to stay when the voice of Mandy, Aria Curzon, decided to stay in Southern California rather than moving to a place where it would be more difficult to get a hold of her for recording sessions. The Official Guide goes on to boldly proclaim that “Mandy was too good to lose!” And if you listen to the special feature included on Album 49, you’ll hear writer Marshal Younger say, “We decided that there were more stories to tell with the Straussberg family.” Well, apparently that wasn’t the case because neither Mandy’s parents nor her brother ever appear on the show again. Mandy gets two more episodes on Album 50, but nothing after the hiatus. Maybe it would have been better if they had moved to Chicago instead of simply fading away with no explanation. If there truly were so many more stories that required the Straussbergs staying in Odyssey, perhaps it’s time they reappeared on the show.

When the Odyssey producers are interviewed on the Official Podcast after each album is released they seem to answer the same questions year after year. (Here are a few examples: When will characters get married? How old is Mr. Whittaker? How long does it take to make an episode? Will a character return to the show? How does Odyssey time work?) They’re all good questions, but they’ve been thoroughly discussed by the writers before—multiple times in fact. Meanwhile, plenty of other questions go unanswered. In this editorial I only talked about four areas that I found in the Official Guide, but there are probably a lot more you could add to the list. When the next Q&A podcast with the producers rolls around, maybe these four conundrums will finally be dealt with. But maybe not. That isn’t the real goal in writing this editorial. It’s not that these four specific questions are so important that they must be answered immediately. The deeper point is that certain topics are frequently focused on during interviews while there are vast areas that go unexplored. I always look forward to interviews with the writers on the Official Podcast, and as time goes on it’s encouraging when you hear them covering new material. These podcasts are definitely at their best when they answer questions from the fans that haven’t been answered before.
Next: Editorial 26
Back: Editorial 24
List of Editorials
This site is in no way affiliated with Focus on the Family. "Adventures in Odyssey" is a registered trademark of Focus on the Family.