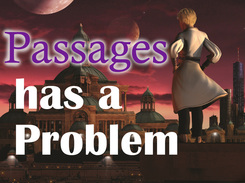 Darien’s Rise was not dramatized just because it was an intriguing story but because it would be faster to create than a whole new regular AIO album. Album 51: Take it From the Top was originally planned to be released in the fall of 2009. The relaunch, however, was delayed to allow the AIO team more time to spend crafting this new beginning, which would be an entry point into the series for new listeners. Album 51 was pushed back to the spring of 2010 and the first novel of the Passages series, Darien’s Rise, was released in the fall 2009 timeslot instead. Around the same time, the Passages novels were being rereleased with new artwork. The new dramatization of Darien’s Rise was highly anticipated by Passages fans but less so by people unfamiliar with the Passages books.

Writer Paul McCusker said at the time that the production of future Passages audio dramas would depend greatly on the success of Darien’s Rise. They would be watching the numbers to see if a sequel could be justified. Given the popularity of the Passages book series, one would think that an audio version would be quite successful and that the continued dramatization of the series would be inevitable. Since that time, however, members of the Adventures in Odyssey team have repeatedly stated that they have no plans produce the next story in the series, Arin’s Judgment. Behind the scenes they may discuss the option, but they have yet to follow through. As we've seen with the rumors of other Odyssey spinoffs in the past, they just don’t materialize in the end.

The 2012 Official Guide gives an alternative explanation. It says the AIO team considered releasing one new Passages audio drama a year but decided against it because they felt the fans would be unhappy if they didn't release two regular Odyssey albums every year. That’s a reasonable stance, but I for one would still be happy to see a new Passages dramatization every two to three years. Anyway, for the next three years after the hiatus two Adventures in Odyssey albums were released with 24 new episodes a year. And then came Album 57. Or did it? No, Album 57 was pushed back from the spring of 2013 to the fall because of the Get in the Show contest and the 25th anniversary the previous year. But this time there were no new episodes produced in its place. Arin’s Judgment could have filled the gap, but again that project was not undertaken.

So, according to the Official Guide, making 24 AIO episodes in a year makes fans happy, but only making 12 regular episodes plus a Passages album in a year makes them unhappy. But in 2013, it looks like the fans will actually get even less than that. So far, all that is planned for this year is 12 regular episodes and no Passages episodes to speak of. This puts a lot of unfair pressure on the long-awaited episodes in Album 57: A Call to Something More.

If the Passages book series is so well-loved, why hasn't the audio series caught on yet? One aspect of this that should be noted is that Darien’s Rise came at an unfortunate time. And I’m not talking about the economic downturn. This was the first appearance of Andre Stojka as Mr. Whittaker. Many fans were listening to the Official Podcast when they heard about Paul Herlinger’s retirement. It came as a shock when it was announced and it was even more shocking when they proceeded to introduce his replacement immediately. The podcast played the first scene of Darien’s Rise where Jack Allen is talking to Whit voiced by Andre. It was our first chance to hear the new Whit and for a lot of listeners it wasn't a pleasant surprise. Since we weren't used to Andre’s voice yet, it was hard to tell the difference between him and Jack. Some thought he sounded too much like Bernard. So when Darien’s Rise finally began airing on the radio, there were mixed reviews. Not only because we weren't accustomed to Andre, but because Andre himself hadn't had time to really get into the role of Mr. Whittaker.

But aside from the new Whit, the delay in adapting the rest of the Passages series into audio dramas may have come down to the fact that it simply does not have as large of an audience as the regular Adventures in Odyssey albums do. Not every AIO fan is an enthusiastic Passages fan and generally the intensity of some parts in Passages is not suited for younger kids. Add to that these are new characters who we have never heard from before being narrated by a new third Mr. Whittaker in a strange new world, that may or may not be real, where kids gain superpowers. At a quick glance, it doesn't seem to have much to do with the Odyssey we have come to love. The market for fantasy is just smaller than AIO’s usual market. The casual fan of Adventures in Odyssey the radio drama hasn't read most of the AIO books, let alone the whole Passages series. And according to a January 2011 poll conducted by the AIO Wiki, thirty-six percent of respondents said they are not interested in the Passages series at all. Perhaps a better marketing strategy could shrink that number in the future.

So while Passages remains a popular series for many dedicated AIO fans, it doesn't look like the rest of the series will be made into audio dramas very soon. At the end of Darien’s Rise, Jack Allen says, “I have a feeling this could turn into a nice adventure.” Well, in the audio world at least, that adventure is still far away. And the more time that passes, the less likely Alan Young will be available to voice Jack for the series. But there’s always hope that it could still happen. If you really want Arin’s Judgment dramatized, I think the best thing you can do is to spread the word about Passages. You can write to Focus on the Family or buy multiple copies of Darien’s Rise, but growing the Passages fan base instead will probably be the best way to influence how the AIO team decides to move forward. The problem with Passages is that it can’t be dramatized unless the fans make an effort to spread their enthusiasm for the series to a larger audience. While the Odyssey crew would probably love to continue adapting the Passages books into the genre of audio drama, their decision to do so must be justified by the interest shown by the fans. Hopefully the Passages series won’t be held back for too long.
Next: Editorial 12
Back: Editorial 10
List of Editorials
This site is in no way affiliated with Focus on the Family. "Adventures in Odyssey" is a registered trademark of Focus on the Family.