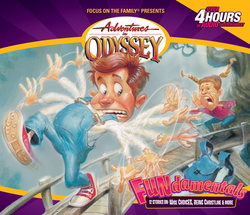 January—April 1989
At Whit’s End, life often imitates, well, life. Maybe that’s why so many kids sort out their questions about faith there. Prayer, being Christlike and evangelism are recurring themes that make for one unexpected adventure after another. In Odyssey, the kids don’t just learn lessons. They live them!
56: By Faith, Noah
Whit tells Jack and Lucy the story of Noah's Ark.

57: The Prodigal, Jimmy
When Jimmy Barclay realizes he's spent all his savings on pizza and video games, he finds it difficult to confront his father.

58: A Matter of Obedience
Tom Riley tells a story about when he was young. In it, he and his sister are assigned to take some medicine to a woman across a woods.

59: A Worker Approved
Robyn Jacobs tries to figure out how to study the Bible.

60: And When You Pray...
Jimmy prays to get a bicycle and it happens. Donna is confused about the nature of prayer and so Whit gives her an object lesson.

61: The Boy Who Didn't Go to Church
A skit about the role of all the members of the Christian body.

62: Let This Mind Be in You
While Whit is gone for a few days, Connie tries to become just like him, but fails in various ways.

63: A Good and Faithful Servant
The Barclay family tries a new budget.

64: The Greatest of These
Robyn Jacobs struggles with her struggling school partner: Oscar Peterson.

65: Bad Company
Despite her parents' concern about hanging around Rachael Woodworth, Donna tries to be her friend. Then the two of them are snagged for shoplifting, while Connie gets involved with a Bible study that doesn't agree with her beliefs.

68: Choices
Lucy Cunningham-Schultz is assigned to write a school report on evolution.