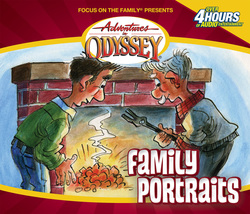 January—April 1987
In 1987, Focus on the Family aired an experimental radio drama called "Family Portraits." It featured the first adventures of John Avery Whittaker, Tom Riley, and many others in the small town of Odyssey. After receiving overwhelmingly positive feedback, Focus decided to launch into full-scale production on what became Adventures in Odyssey. You can now enjoy all twelve episodes in this exclusive collection of the first family audio dramas by Focus on the Family. As you join Whit and his friends in Odyssey for the very first time, timeless truths will be revealed about sibling rivalry, the consequences of lying, peer pressure, parent-child relationships, and the effects of divorce. Also included: A half-hour roundtable discussion with Chuck Bolte, Phil Lollar, and Steve Harris about the creation of the series.
FP1: Whit's Visitor
Whit finds a young boy named Davey Morrison hiding in his garage. The boy's parents are getting separated and Whit realizes Davey needs some help coping with the pain.

FP2: Dental Dilemma
Emily Forbes loves the dentist. But when her older brother frightens her with lies about her teeth, she fears Dr. Graves is going to pull all of them out!

FP3: The New Kid in Town
After a meeting with his new neighbors, Whit reaches out to make their daughter feel welcome being the new kid.

FP4: No Stupid Questions
Chris Gottlieb, a man in a wheelchair, and Meg Stevens, a girl with a lot of questions, form an odd friendship when they help each other out.

FP5: You're Not Going to Believe This
Budgie likes to exaggerate and his cousin Jaime Wentworth feels he just can't trust him anymore. After an incredibly over-the-top tale, Whit helps both Jamie and Budgie deal with their differences and accept each other for who they are.

FP6: My Brother's Keeper
Phillip Callas gets angry during baseball practice and tells his younger brother Dean Callas to go home. When Dean doesn't return home, the police get involved and try to track down the boy.

FP7: While Dad's Away
While showing a family around a house that is up for sale, Whit tells a couple the story behind the house and why the former owners decided to move.

FP8: The Letter
After her father embarrasses her in front of a friend, Stacey refuses to speak to him. Her mother intervenes and tries to prove to her how much her father actually loves her.

FP9: A Different Kind of Peer Pressure
The Hudson family is having trouble with peer pressure. The daughter, Blair Hudson, decides not be friends with a guy who is not considered 'in' and her father, Richard Hudson, puts down a co-worker to fit in.

FP10: In Memory of Herman
When the Hardwick's family frog dies, they have to learn to deal with the death of a loved one and face some important life changing decisions.

FP11: A Member of the Family, Part 1
Whit's grandson Monty comes to visit him but starts causing problems for Whit and the rest of the town when Monty starts acting out, feeling his grandfather has been treated him unfairly.

FP12: A Member of the Family, Part 2
Whit's grandson Monty comes to visit him but starts causing problems for Whit and the rest of the town when Monty starts acting out, feeling his grandfather has been treated him unfairly.

FP13: A Simple Addition
In an effort to get attention, young Nicky Rogers does whatever he can to get his parents to stop thinking about their soon-to-be-born child.
List of Special Collections
This site is in no way affiliated with Focus on the Family. "Adventures in Odyssey" is a registered trademark of Focus on the Family.