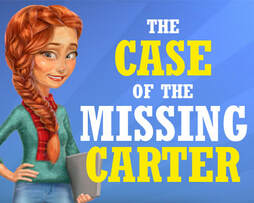 ​Adult characters are making a comeback on Adventures in Odyssey. And it makes sense when you remember that we lost so many of our favorites after Album 50, such as Bernard Walton, Jack and Joanne Allen, Tom Riley, Bart Rathbone, Edwin Blackgaard, and others. Album 53 gave us Penny Wise, now married to Wooton Bassett, as well as Detective Polehaus. Album 62 brought Whit’s childhood friend Wilson Knox to town and Album 65 gave us Jillian Marshall. And I have to say I am indeed a fan of this trend. As I’ve written in the past, creating regular adult characters is important because it’s an investment in the long-term future of the show. Kids come and go, but the adults stick around and bring some much-needed continuity across different eras. That’s why I was happy to hear about the introduction of another character, Renee Carter.

Renee first appears in the episode Things Not Seen (Season 3). It’s a sparsely populated episode, featuring only four main characters, and as a result feels more like the good old days of classic AIO. This is Renee’s introduction to Whit’s End and it seems to intentionally echo Whit’s Flop (Album 1). Just as Davey Holcomb’s pizza oven shorts out as he turns it on while Tom is in the back using the garbage disposal, Renee experiences a bit of chaos trying to make a Wod-Fam-Choc-Sod while Whit is working on the Imagination Station. You’d think Whit would have fixed the wiring at his shop by now. And so Renee makes her grand debut and enters the world of Odyssey in style.

Well, not quite. This episode was originally supposed to appear in Album 60, but it was removed for space and appeared as an exclusive AIO Club episode instead. That means that a large portion of Adventures in Odyssey’s audience has yet to hear from Renee. And as every single one of her episodes since then has also been confined to the club, it’s like she doesn’t exist for listeners outside the club. Now, does it really matter that Renee is a club-exclusive character? Do we really need her? It might be helpful at this point to go back to an interview with writer Phil Lollar, who created Renee.

In an October 2016 edition of the Official Podcast, Phil Lollar talks about why the character of Renee Carter was created. He discusses the influence of Star Trek: The Original Series on the process and explains that if Mr. Whittaker was equivalent to Captain Kirk, Eugene to Mr. Spock, and Connie to Dr. McCoy, then there was a gap in AIO because there was no equivalent to Scotty. And thus Renee, an expert in machine and mathematics, was created to fill that gap. That’s a significant statement for Phil to make. To place Renee alongside our top three characters, and ahead of others such as Wooton and Jason, tells us that the plan is to make Renee a very important character. She’s going to have a major role to play on the show, perhaps for a long period of time if it works out that way. That’s all the more reason to have Renee appear outside the AIO Club.

When Mr. Whittaker left for the Middle East in Album 21 there was a noticeable gap in the show. To fill that gap the AIO team brought us Jack and Jason. Jack fulfilled the wise, grandfatherly side of Whit’s personality, while Jason took on the more playful, inventive side. But what if the AIO Club had existed back then? What if Jack or perhaps Jason only appeared in club episodes? That would mean they would be missing from Darkness Before Dawn, despite the clashes between their two characters being a central part of the album. Conflict is essential in any story and we’ve already heard how there’s a lot of potential for Eugene and Renee to clash in future episodes. If Renee fills a gap in the show, then that gap still exists in the world of the regular albums.

And unlike Wooton and Jason, Renee should really be a constant presence at Whit’s End. She’s Whit’s intern after all. That makes it harder to keep her in the club without creating a noticeable absence in the regular albums. Many of AIO’s long-term story arcs only exist outside the club, which unfortunately excludes Renee from ever taking part. But should Renee just show up one day with zero explanation in one of the regular albums? Probably not. Non-club listeners need a proper introduction. Perhaps we could have one of our major characters meet Renee for the first time. But the longer Renee stays hidden in the club, the harder this becomes. She’s already met Whit, Connie, Eugene, Olivia, Zoe, Valerie, and Wilson Knox. If she meets everybody we care about in Odyssey in the club, they’ll be no one left to smooth the transition in her non-club debut. The sooner she makes it into the albums, the better.

Quite a number of Adventures in Odyssey Club episodes feature stories from times past, trips to foreign lands or adventures in the Imagination Station. And so Renee can seem very isolated from what’s happening in the town of Odyssey at the moment. While major story arcs are playing out in the albums involving Buck Oliver and the Meltsners, Jules and Connie, and Emily, Matthew, and Morrie Rydell, Renee is nowhere to be found. Maybe she’s locked away in Whit’s workshop whenever something dramatic happens. Renee’s name was briefly mentioned in Crash Course (Album 63), so we know that in the world of the albums she is alive and well, even if she hasn’t appeared in person yet. At this point it’s only a matter of time.
​
I think fellow Adventures in Odyssey listeners will agree with me in saying that we want to learn more about Renee Carter. Whether we’re part of the club or not. We're intrigued by what she can bring to the show. When you have Phil Lollar, the co-creator of Odyssey, talking about how Renee was designed to fill a gap in the show’s family of characters, it seems only natural that you’d want to have her appear in more than just club-exclusive episodes. Renee has so much potential for growth. She seems like a great addition to the show and it would be wonderful if she could participate in AIO’s main story arcs featured in the regular albums. Club listeners have nothing to lose. Rather, everybody stands to gain. It’s time for Whit’s End’s latest employee to step out into the open.
Next: Editorial 35
Back: Editorial 33
List of Editorials
This site is in no way affiliated with Focus on the Family. "Adventures in Odyssey" is a registered trademark of Focus on the Family.