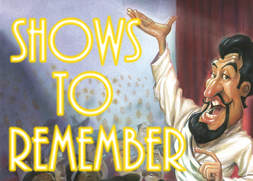 ​This year Adventures in Odyssey released a special collection of episodes called Fan Favorites. Listeners had the opportunity to vote on their favorite shows, and from those votes twenty-four of the top episodes were chosen to be in this new collection. It includes some really great episodes like The Case of the Secret Room, The Search for Whit, Do or Diet, and The Other Side of the Glass. But since there are so many shows to choose from after 30 years of AIO, some worthy contenders will inevitably fail to make the cut.

One of the limitations that Fan Favorites has is because of how the Adventures in Odyssey Club works. The current policy is that exclusive club episodes are not later released outside the club. So although fans might really like some of the club episodes, such as The Cure (Season 2), they aren’t going to be included on a special collection like Fan Favorites. And unfortunately, as of yet the character of Renee Carter has only appeared in club episodes. It might be interesting to see an AIO Club exclusive album featuring the best shows from there.

Another aspect of Fan Favorites is that many of the votes were likely cast by newer and younger fans. And so it’s not surprising that the set includes quite a few recent episodes such as Legacy, Crash Course, Connie the Counselor, and A Very Bassett Wedding, all of which came out within the last two years. But at the same time, the show Legacy can also be seen as a celebration of AIO’s past, as are the episodes Push the Red Button and The Pilot. So it appears that Odyssey’s older fans still have some influence too.

In this editorial I have put together a list of twenty-four of my favorite episodes from the past 30 years. It’s my attempt to design a special collection of favorites which were unfortunately left out of the official one. In my collection I tried to minimize the amount of multi-parters because they take up a lot of room. I also didn’t include episodes from major sagas like Novacom and instead chose standalones you can listen to without context. And finally, although I love episodes like The Mortal Coil and Life Expectancy, I thought they would be a bit too heavy for this collection. They just didn’t fit alongside some of the lighter episodes.

I’ve listed the episodes below, along with some brief descriptions. There aren’t any major spoilers here, so don’t worry if you haven’t heard all of these episodes yet.

Let This Mind Be in You (Album 4)
Mr. Whittaker goes away for the weekend and leaves control of Whit’s End to Connie and Eugene. Needless to say, the situation quickly descends into chaos. Connie and Eugene do their best to impersonate Whit, leading to some hilarious results, and engage in plenty of bickering with each other. It’s a classic show with a simple premise.

Suspicious Minds (Album 8)
Connie and Eugene continue to bump heads, this time in attempt to solve the mystery of some missing money, and end up transforming Whit’s End into a battleground. The hijinks are further fueled by window washer Bernard Walton’s desire for a little harmless entertainment.

Someone to Watch Over Me (Album 10)
Jimmy Barclay is plunged into one of the most intense adventures of his life. He experiences a World War II bombing mission, being a secret agent during the Cold War, a sea battle with pirates, and a spaceship journey. But there’s something more significant going on than just a lot of fun and games.
​
A License to Drive (Album 14)
Eugene has a secret. He doesn’t just ride a bicycle because he wants to be environmentally friendly. The fact is he doesn’t have a driver’s license. And who would be the perfect person to teach him how to drive? Long-time co-worker Connie Kendall, of course. You’ll want to come along for the ride so you don’t miss any of the laughs in this episode.

Flash Flood (Album 15)
It’s a guys’ night out. Better than that, it’s a guys’ night out in the great outdoors. Whit, Tom, Bernard, and Eugene go camping and end up in a fierce struggle against nature, including both the weather and the wild animals.

Family Values (Album 18)
When you think of the perfect Odyssey family, who first comes to mind? How about, the Rathbones? Bart, Doris and Rodney get together to try and win the title of “Family of the Year.” Will our favorite dishonest businessman and his son, Odyssey’s most notorious bully, have a change of heart?

My Fair Bernard (Album 18)
Bernard Walton is a window washer, not an actor, much less a Shakespearean actor. But in an attempt to draw in more customers, he gets a crash course in acting from Edwin Blackgaard before his performance debut on stage at the Harlequin Dinner Theatre.

Terror from the Skies (Album 18)
Aliens invading Odyssey? That’s exactly what Jimmy Barclay and Lawrence Hodges are afraid of when they hear a live radio show that appears to be broadcasting that very thing. Is it all just Lawrence’s overactive imagination, or could there be another explanation?

Truth, Trivia and ‘Trina (Album 19)
Is it possible to outsmart the guy who knows everything? Eugene is pitted against Connie and Katrina in a battle of intelligence on a televised game show, hosted by Bart Rathbone. Be prepared to play along and test your knowledge against Odyssey’s own walking encyclopedia.

Aloha, Oy! Parts 1-3 (Album 19)
The Barclay family and the Rathbones aren’t the best of friends. But perhaps a trip to Hawaii together can change that. An adventure complete with walking over hot coals, teen hormones, parasailing, and battleships awaits.

It Happened at Four Corners (Album 21)
Eugene and Bernard can’t stand each other at the best of times, but what if they were stuck together in a car on a road trip across America? Things get a little bizarre when a map to a lost gold mine is thrown into the mix. Tag along for this wild ride to find out if their friendship can survive this latest challenge.

For Unto Us a Child is Born (Album 22)
Jimmy Barclay had good intentions. All he wanted was to produce a nice, live Kids’ Radio presentation about the nativity. Simple, right? Or maybe not. Troubles with sound effects and temperamental actors are the least of his worries as one thing after another attempts to thwart his Christmas production.

A Victim of Circumstance (Album 23)
Just when Jason is admiring Whit’s End’s brand-new skylight, who should come crashing through the glass but Rodney Rathbone. Who’s to blame? Is it the boy with a penchant for climbing around on other people’s roofs? Or the owner of the roof itself? An adventure filled with lawyers, frivolous lawsuits, and plenty of laughs follows.

The Underground Railroad, Parts 1-3 (Album 24)
There’s more to the history of Whit’s End than meets the eye. It turns out that during the time of slavery it was an important stop for runaways along the Underground Railroad. But those who made it this far still weren’t safe from being tracked down by their masters. Plenty of heart-pounding drama and intensity in this one.

Blind Justice (Album 27)
Eugene and Bernard get jury duty and are given the responsibility of deciding whether young Donald Wilson is guilty of burglary. Tensions rise among the jurors when one of them, Eugene, believes Donald might be innocent after all.

It’s a Pokenberry Christmas, Parts 1-2 (Album 31)
Word has it that things are not going well for the Barclays in their new home of Pokenberry Falls. The church is going bankrupt and George Barclay is getting desperate. So Whit and Eugene come to investigate what’s really going on.

The Triangle, Parts 1-2 (Album 36)
Whit and Jack may be good friends now, but they have had their disagreements over the years. One incident that almost broke them apart happened while they were in college. It all started when Whit fell in love with his future wife, Jenny. There was only problem. She was dating Jack at the time.

Two Friends and a Truck (Album 44)
What do you do if you borrow something and then accidentally break it? That’s what Eugene has to figure out when he borrows Bernard’s truck and lets it roll down a hill, crashing into a tree. Bernard, seeing that his truck looks like it’s been to a demolition derby, is understandably peeved.
​
As the Fan Favorites collection seemed to focus on episodes featuring the Washingtons, Wooton and Penny, as well as Connie, Jules and Buck, I tried to balance this out in my list by adding in some more of the Barclays, Rathbones, and Eugene and Bernard. Fan Favorites also tends to focus on the most recent episodes, while I focus more on the past shows. It only includes one story from the Hal Smith era (The Case of the Secret Room), which I think is unfortunate. In my list the first half take place during Hal Smith’s time as the voice of Mr. Whittaker, while the second half take place afterwards. Regrettably, I wasn’t able to fit the twelve-part Green Ring Conspiracy (Album 53) from the Andre Stojka era, although I would have liked to.
​
As fans we’re all going to have different favorites, especially now that there are over 800 Adventures in Odyssey episodes in existence. They’re so much to choose from. And it depends on how you’re feeling as well—whether you’re in the mood for a comedy, an action-packed thriller, or a historical episode. You can find nearly every genre in the canon of AIO. It’s like there’s something for almost every occasion. You won’t find that in your average kids’ show. That’s because Odyssey doesn’t shy away from the great variety of life experiences people go through, both the highs and the lows. I look forward to the classic episodes still to come as we move forward into the next 30 years of Adventures in Odyssey.
Next: Editorial 31
Back: Editorial 29
List of Editorials
This site is in no way affiliated with Focus on the Family. "Adventures in Odyssey" is a registered trademark of Focus on the Family.