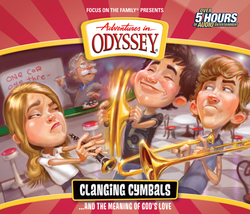 October—December 2011
What is the true meaning of love? The kids in Odyssey will find out even while the town is buzzing with competition. A scavenger hunt pits Matthew, Jay, and Barrett against each other in a musical extravaganza. Can Barrett take his eyes off the prize to focus on what’s truly important? Meanwhile, Olivia struggles to show "brotherly love" when Matthew wants to take away her role as Wooton’s camp assistant and Eugene must decide how to be honest when Connie showers him with a string of gifts...that he can’t stand. Integrity, trust, and forgiveness are all put to the test as the folks in Odyssey learn the lessons of 1 Corinthians 13.
﻿691: Wooton Knows Best
Olivia and Matthew Parker compete for a chance to be Wooton Bassett's camp assistant.

692: A Penny Saved
Penny Wise deals with the aftermath of her role in the Green Ring Conspiracy and plans for the future.

693: The Amazing Loser
When Whit's End sponsors a band camp, Matthew, Jay, and Barrett compete in a musical scavenger hunt.

695: Forgiving . . . More or Less
After hearing a story from Red Hollard, Camilla Parker decides to make a forgiveness list.

696: You're Two Kind
Ryan decides to partner with Brad for a school project, but has second thoughts when he overhears Brad making fun of him. Meanwhile, Connie gives Eugene a series of bejeweled gifts and he struggles to tell her the truth—he hates them.

697: A Penny Earned
Penny Wise searches for her future in a job and as Connie Kendall's roommate.

698: Never for Nothing
Grandma Lucia recounts to Olivia her story of a childhood friend, an event that taught her that love is "never for nothing."

699: Emily, the Genius
Emily is overwhelmed when a school test shows that she is a genius.

700: How to Sink a Sub
When Katrina becomes their substitute teacher, Jay and Valerie rouse the class to revolt, even persuading Olivia to help with a plan to get Katrina fired.

701: Unbecoming Jay
Jay schemes a way to ditch his cousin Cindy by leaving her with Barrett, but Priscilla grows jealous of the new friendship.

702: Childish Things
Before a gallery exhibit of her work, Penny tries a variety of methods to decide whom she can trust in life.﻿
Next: Album 55
Back: Album 53
List of Albums
This site is in no way affiliated with Focus on the Family. "Adventures in Odyssey" is a registered trademark of Focus on the Family.