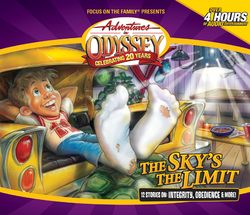 September—December 2007
There's not a kid in Odyssey who wouldn't love to hang out at Wooton's house—where comic books and a Cadillac-turned-couch are only half the fun. But when a boy betrays his trust, will Wooton forgive him? Meanwhile, Odyssey's favorite quirky mailman falls in love with a young lady who's (gulp!) exactly like him. And the Meltsners face an unexpected decision that could forever change their relationship. What's next? The Sky's The Limit in these stories of God's will, reconciliation and more.
619: A New Era, Part 1
Upon returning to Odyssey, Leonard Meltsner faces a crisis while Eugene and Katrina get disturbing news from the Ashanti tribe in Africa.

620: A New Era, Part 2
Upon returning to Odyssey, Leonard Meltsner faces a crisis while Eugene and Katrina get disturbing news from the Ashanti tribe in Africa.

621: A New Era, Part 3
Upon returning to Odyssey, Leonard Meltsner faces a crisis while Eugene and Katrina get disturbing news from the Ashanti tribe in Africa.

622: B-TV: Temptation
The B-TV gang tell various stories about temptation, including the story of King Solomon.

623: Buddy Guard
Grady hires a bodyguard to protect him from Rodney. Bryan Dern convinced his intern to sue people for frivolous actions.

624: Wooing Wooton
Wooton Bassett participates in a charity auction on behalf of his father and meets the girl of his dreams and Grady McKay tries to protect his mom from being fired for something he did.

625: Something Significant
In the Imagination Station, Trent DeWhite journeys to turn-of-the-century India, the South Pacific, and Constitution Island to see stories of people who were used by God.

626: Life, in the Third Person, Part 1
Mandy Straussberg starts talking about herself in the third person as a way to deal with her parents divorce while her father and brother are looking for a place to live in Chicago.

627: Life, in the Third Person, Part 2
As her parents seem headed for divorce, Mandy Straussberg narrates the story of her life. Meanwhile, her father Stephen works on making his move to Chicago permanent.

628: The Highest Stakes, Part 1
When Grady's father Carson comes back to Odyssey, his mother has a hard time believing that his intentions are good.

629: The Highest Stakes, Part 2
In a hasty effort to get Wilson his money by the deadline Carson McKay makes a decision that he soon regrets.

630: Chip Off the Shoulder
Connie starts working on her book again while Kelly learns to trust the people of Odyssey.
Next: Album 50
Back: Album 48
List of Albums
This site is in no way affiliated with Focus on the Family. "Adventures in Odyssey" is a registered trademark of Focus on the Family.