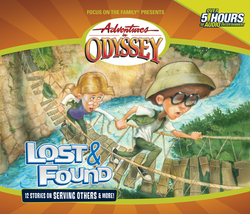 July 2005—January 2006
Could America's newest singing sensation be found right here in Odyssey? The popular TV show "America Sings!" comes to small-town U.S.A. But do Connie, Harlow, and Bart have what it takes to be the last singer standing? Meanwhile, Eugene and Katrina are off to deepest Africa in search of clues about his past. But a raging river stands between them and the truth.
572: Odyssey Sings!
When America Sings! comes to Odyssey, many hopeful singers line up to audition.

573: Back to Abnormal
Eugene discovers he no longer has a job at Campbell College and tries to find a new purpose for his life.

574: Prisoners of Fear, Part 1
Eugene tells of a trip he and Katrina took to a small village in Africa, before they came back to Odyssey. The people there aren't exactly friendly...especially when they believe that Eugene and Katrina have awakened an ancient curse!

575: Prisoners of Fear, Part 2
The plot thickens as Eugene and Katrina find themselves caught in the struggle between two African tribes. But everything takes a sudden turn when Eugene discovers more about a connection to his own past.

576: Prisoners of Fear, Part 3
Eugene and Katrina's African adventure comes to a thrilling climax. Eugene discovers more about his parents and their connection to this isolated village. But the couple realizes that their true purpose on this mission is overcoming the lies that imprison their new friends in Africa.

577: The Business of Busyness
Eugene starts up a new company to help people around town and the Washington family discover that there aren't enough hours in the day to complete everything in their busy lives!

578: All-Star Witness
Eugene is hired to defend Tom Riley against former mayor Bill Jenkins and his daughter, Ashley, who are suing him for unfair treatment.

579: Always
Aubrey Shepard packs her bags and leaves for college, while the rest of the Shepard family try to cope with the change in their lives.

580: Tales of a Small-Town Thug
After reading a damaging story by Rusty Gordon, Eugene tries to be less of a know-it-all and Liz Horton stops bossing people around.

581: A Christmas Conundrum
Due to a comedy of errors, the Whit's End crew get the wrong ideas of what their friends are getting them for Christmas and try to outdo each other.

582: Silent Night
Whit's Christmas plans are ruined, and so he has to find a way to spend his Christmas alone.

583: The Champ of the Camp
Connie continues writing her book and reflects on events from her childhood that have interesting connections to the present!
Next: Album 46
Back: Album 44
List of Albums
This site is in no way affiliated with Focus on the Family. "Adventures in Odyssey" is a registered trademark of Focus on the Family.