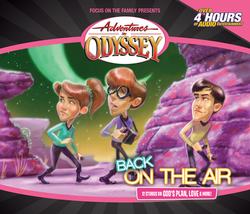 July 1995—March 1996
On the heels of Dr. Blackgaard’s demise, those who participated in the treachery are feeling the sting of consequence. Meanwhile, new life in Christ means growth for Zachary Sellars and his mom, and for Eugene, it also brings about the restoration of a special friendship. And for the Barclays, an intriguing offer finds them seeking God’s will for their future. Lessons about life, love and the importance of following God’s plan are in store for one and all—don’t miss a minute of this exciting series!
321: Hidden in My Heart
KYDS Radio launches a hilarious program that involves parodies of Star Trek, Rescue 1-1-9, and Lassie!

335: Love is in the Air, Part 1
Katrina Shanks returns to Odyssey to visit Eugene. The two try and sort out loose threads in their relationship. Meanwhile, Jason Whittaker and Tasha Forbes become engaged.

336: Love is in the Air, Part 2
Jason Whittaker and Tasha Forbes, and Eugene and Katrina Shanks fight, while Connie feels left out.

337: W-O-R-R-Y
Erica Clark receives a horrible haircut just before her school pictures and tries to deal with it, while Sam Johnson tries to learn how to spell.

338: Easy Money
Butch and Sam want to buy some new hockey equipment, but Butch takes a few short cuts that land him into serious trouble.

339: Do, For a Change
Zachary Sellars is having trouble being a Christian, while Eugene does not seem to be having any trouble at all.

342: Welcome Home, Mr. Blackgaard
Edwin Blackgaard returns to Odyssey with his tail between his legs and wants to make up for leaving without notice during his brother's reign over the town.

343: The Pretty Good Samaritan
Charles Thompson and Brenda Perry learn the meanings of two of Jesus' stories by experiencing them in real life.

346: St. Paul: Voyage to Rome
Using KYDS Radio, Jack Allen tells the listeners a story about Antoninus and Julius who went to Rome to speak with Paul and Caesar himself.

347: St. Paul: An Appointment with Caesar
Using KYDS Radio, Jack Allen tells the listeners a story about Antoninus and Julius who went to Rome to speak with Paul and Caesar himself.
Next: Album 27
Back: Album 25
List of Albums
This site is in no way affiliated with Focus on the Family. "Adventures in Odyssey" is a registered trademark of Focus on the Family.