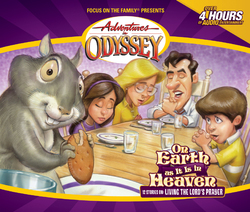 May—July 1993
Whit, Connie and the whole Odyssey crew explore the true meaning of the Lord's Prayer in On Earth as It is in Heaven. Lucy and Connie must decide between what they want and seeking God's will. A car accident dents Courtney's dreams of becoming a ballerina. And Lawrence joins the Bones of Wrath, almost ruining his relationship with the Barclays.
230: Our Father
Lawrence Hodges is missing a father figure in his life, as his real dad is always off on some trip. So he decides to join the Bones of Wrath.

231: Hallowed Be Thy Name
Connie uses BEAVRS to learn about many of the names of God.

232: Thy Kingdom Come
After Connie and Whit talk about Eugene's possible acceptance of Christianity, Whit and Eugene discuss the nature of God and heaven.

233: Thy Will Be Done
Connie tries to convince Eugene to become a Christian by setting up situations at Whit's End. Lucy Cunningham-Schultz debates the values of writing for the a "liberal" school newspaper.

234: Our Daily Bread
After George Barclay loses his job, the Barclay family wonders what they will do for income.

235: Forgive Us As We Forgive
Ernie Myers is released from prison and Eric has a tough time adjusting to the change.

236: Into Temptation
Jimmy Barclay tries out a new invention of Whit's, the Room of Consequence. By using it, he is able to see the possible results of his actions.

237: Deliver Us From Evil
Bernard Walton and Eugene tell the story of the Fiery Furnace to Marsha.

238: For Thine Is the Kingdom
Courtney Vincent uses the Room of Consequence to see the results of her bitterness over losing her dream to be a ballerina.

239: The Power
Nicholas Adamsworth uses his computer skills to the control school records and grades.

240: And the Glory
When Pete Flanagan molds his replacement pitcher Henry Thomas into an even better pitcher than him, Henry's ego gets the best of him.

241: Forever, Amen
Danny Schmidt is excited he's going to have a little brother. But he soon gets it into his head that the rest of the family will ignore him once the new baby is born, and hopes his little brother doesn't come out.
Next: Album 18
Back: Album 16
List of Albums
This site is in no way affiliated with Focus on the Family. "Adventures in Odyssey" is a registered trademark of Focus on the Family.