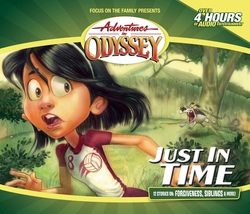 March 1990—January 1991
Life in Odyssey is never boring! The wacky adventures of the Odyssey gang lead them to learn new lessons in honesty, brotherly love, and helping one another—with the help of John Avery Whittaker, of course!
109: Two Sides to Every Story
Jimmy and Donna Barclay tell two very different stories of how an evening at home actually went.

118: What Happened to the Silver Streak?
Since she is from a "reform school", Michelle Terry is suspected when a train car winds up missing.

119: Better Late than Never
Robyn Jacobs is always late. After being left behind and experiencing Twilife Zone, she is determined to never be late again.

126: Wishful Thinking
After wishing her brother had never been born, Donna Barclay wakes up the next morning to discover she's received her wish!

127: Have You No Selpurcs?
Curt Stevens and Lucy Cunningham-Schultz find out what "selpurcs" are by playing a game of Whit's design.

129: Not One of Us
Lucy and Connie travel to Sloughburgh where they get a first hand experience of what it feels like to be treated in a discriminatory way.

130: Bernard and Joseph, Part 1
Bernard Walton shares the story of Joseph and his eleven brothers to Artie Powell, who thought he had problems with his numerous siblings.

131: Bernard and Joseph, Part 2
Bernard Walton shares the story of Joseph and his eleven brothers to Artie Powell, who thought he had problems with his numerous siblings.

133: Cousin Albert
Lucy Cunningham-Schultz's cousin Albert Schultz doesn't know how to read and has been hiding it all his life. Lucy tries to convince her cousin to get the help he needs.

140: The Vow
Donna Barclay gets the impression that her parents are headed for a divorce, so she sets up a plan to keep the two of them together!

141: Over the Airwaves
KYDS Radio puts together a bunch of shows involving adaptations of parables that deal with living a good life.
Next: Album 10
Back: Album 8
List of Albums
This site is in no way affiliated with Focus on the Family. "Adventures in Odyssey" is a registered trademark of Focus on the Family.