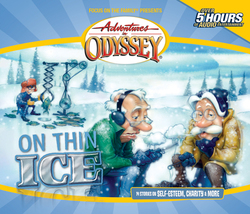 September 1989—November 1990
As the snow falls in Odyssey, the town enters a season of peace and quiet—NOT! Whit's grandchildren stop in for a very disquieting holiday visit. The Barclays entertain some unexpected and mysterious Christmas guests. But in the midst of these challenges, friends in Odyssey learn priceless lessons about bravery, compassion and a whole lot more.
86: Isaac the Insecure
Isaac Morton wants to be just like Jack Davis, but when the two are partnered up for a school assignment, it seems clear that Jack doesn't want anything to do with Isaac.

95: The Very Best of Friends
Donna realizes she is still bitter about Karen's death a year after she has died. At the same time, Jimmy and Oscar Peterson put on a Shakespeare play.

96: The Reluctant Rival
Whit's granddaughter, Jenny Whittaker-Dowd, is given a special violin solo which causes friction with the other children.

97: Monty's Christmas
Monty Whittaker-Dowd is frustrated that his mother always insults his father, so he tries to find a way to escape from his family problems.

98: The Visitors
The Barclay family finds a family huddling in their shed and are uncomfortable with them staying. After the family has left, the Barclays realize they have made a big mistake and go looking for them.

99: The Barclay Family Ski Vacation
The Barclays go skiing, Donna Barclay develops a crush on her instructor, and George comes to grips with his daughter growing up.

101: Scattered Seeds
Connie directs one of Whit's plays called "The Sower and the Seeds", but when her cast starts abandoning her, she has to find ways to deal with it.

103: Front Page News
In an attempt to get out of gym class, Curt Stevens and Oscar Peterson join the Odyssey Owl; but their lack of experience causes problems.

104: Lincoln, Part 1
Jimmy uses the Imagination Station to travel back to the 1800's! He meets up with a fellow named Abraham Lincoln in Washington, D.C., but events soon take a drastic turn!

105: Lincoln, Part 2
Jimmy uses the Imagination Station to travel back to the 1800's! He meets up with a fellow named Abraham Lincoln in Washington, D.C., but events soon take a drastic turn!

108: Isaac the Courageous
Isaac Morton is pressured to join the "Bones of Wrath" to fit in.

128: One Bad Apple
Tom Riley investigates what could be causing people to become sick from eating his apples.

132: Thanksgiving at Home
While George and Mary Barclay are sick in bed on Thanksgiving, both Jimmy and Donna decide to take the initiative and make dinner on their own.
Next: Album 8
Back: Album 6
List of Albums
This site is in no way affiliated with Focus on the Family. "Adventures in Odyssey" is a registered trademark of Focus on the Family.