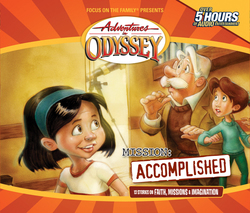 May 1988—February 1990
Everybody in Odyssey is on some kind of mission. Jimmy signs up to help missionaries and ends up in the jungles of Central America! Robyn has to find the Treasure of LeMonde...before it's too late. And Whit, Connie, and everyone at Whit's End learn that forgiveness and faith go a long way!
28: The Price of Freedom
Mr. Altman teaches his class that the men who in the Vietnam war were killers. This doesn't sit well with Kirk McGinty, who's father died in the war fighting for his country.

80: A Prisoner for Christ
Nicholas Adamsworth uses the Imagination Station to experience the story of Onesimus from the the book of Philemon in the Bible.

81: Good Business
Robyn Jacobs tries to start a business mowing lawns, but finds that it is too difficult to do by herself. After hiring several employees, she deals with labor problems.

82: Heatwave
Jack Davis and Oscar Peterson solve the mystery of a strange kid and an armload of lumber.

87: Elijah, Part 1
Robyn Jacobs and Jack Davis use the Imagination Station to experience the story of King Ahab, Queen Jezebel, Elijah, and the drought.

88: Elijah, Part 2
Robyn Jacobs and Jack Davis use the Imagination Station to experience the story of King Ahab, Queen Jezebel, Elijah, and the drought.

89: That's Not Fair
Connie, Donna Barclay and Oscar Peterson all get the chance to see what would happen if everyone was treated fairly.

90: But, You Promised
In a pinch about losing her bike, Robyn lies about the people who stole it.

91: A Mission for Jimmy
Jimmy Barclay dreams about working with Dan Isidro, a missionary to Nicaragua.

92: The Ill-Gotten Deed
Whit tells Calvin the story of brothers Horace and Grover McAlister, and how revenge is far less productive than work.

93: Rescue from Manatugo Point
Whit flashes back to the times he had as a signalman for the Navy in World War II.

94: Operation: Dig-Out
Whit tells Connie the story of the battle in which he was wounded in World War II.